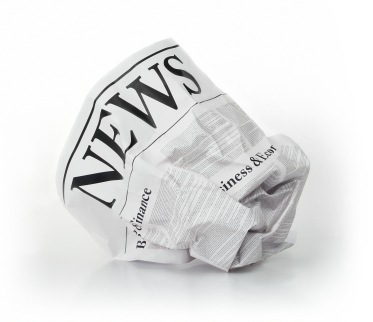 Newspaper journalists are a dying breed.

According to The American Society of News Editors’ (ASNE) annual newsroom census, which was released last week, 2013 saw a net loss of 1,300 full-time newspaper journalists.

The good news, if there is any, is that the losses totaled only about half of the jobs lost in 2012, bringing total newsroom employment at newspaper organizations to roughly 36,700, a decline of 3.2 percent from the 38,000 counted in last year’s census.
Put in perspective, newsroom employment has fallen 33 percent from a pre-recession peak of 55,000 in 2006 and is down 35 percent from its all-time high of 56,900 in 1989, according to the ASNE report released last week.

Losses were heavily concentrated at the major metropolitan daily papers with a circulation range of 100,000-500,000, where year-to-year job declines were roughly 16 percent.

This trend, not surprisingly, is attributed to continued losses in print advertising, which are only partly offset by gains in digital advertising and circulation revenues.

The continued decrease in the number of media professionals is no surprise to those who work with reporters on a daily basis. It used to be that you could get a reporter on the phone, or get them to reply to emails. But that is not a sure thing anymore. We recently conducted outreach regarding a legitimate news event to 100 reporters, and could not even get one to pick up the phone.

Here are a couple of ways PR practitioners can adapt to the continually dwindling number of reporters:

1. Make your pitches count: Is your press release or press event really pressworthy? If not, then it is even more unlikely that you will get coverage. In fact, in sending non-newsworthy pitches to reporters, you potentially harm your chances of getting press in the future.

2. Foster relationships: This hasn’t changed from when newsrooms were full and Craigslist was just an idea. Meeting reporters for backgrounders is a good practice, and any reporter worth his/her salt will welcome talking to you about potential news events.

3. Keep media lists updated: A media list you compiled at the beginning of the year is already outdated. Some of the reporters have moved on, and others are covering different beats. The more targeted and up-to-date you are with your list, the more success you will have in reaching a reporter.

4. Social Media: Go directly to your client’s customers on social media, but remember that no one likes commercials. Engage in real conversations in a real voice, not one generated through legal or marketing departments.

5. Paid media: With earned media becoming more challenging, savvy media outlets are realizing businesses will pay to get placement. Just be sure you get information about ROI before you go this route. Placing an article in a newspaper that gets buried in its digital edition and is not searchable is a waste of time and money.