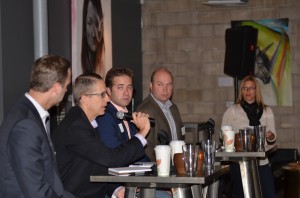 GroundFloor Media hosted an Octobers media panel at Infinite Monkey Theorem as part of our regular #GFMConnects event series. The panel featured four of our city’s most recognizable media figures:

The panel members shared some interesting insights about how they interact with public relations professionals, what mistakes they think we make, and how they like to find their stories.

I thought it might be helpful to paraphrase a few of the insights they shared: