Is Controversy Good for Ratings? 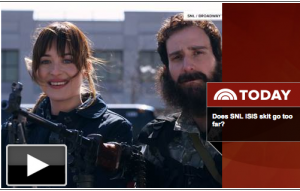 Saturday Night Live (SNL) is no stranger to controversy and pushing the boundaries of comedy.

The latest controversy has to do with a skit about ISIS that was a parody of a Toyota commercial that ran during the Super Bowl where a father drops his daughter off at the airport as she’s embarking on her military career. Chances are the firestorm that’s taking place on media and social media will subside soon, but not before it drives thousands, if not millions of people to watch the video on its site and tune back in to SNL.

So, is controversy good for ratings? You bet. NBC Nightly News’ ratings are up due to the embarrassment it recently faced when Brian Williams admitted to “embellishing” his wartime experiences.

Well, really there is. Bad publicity has destroyed brands, shareholder value at global companies, forced elected officials out of office, and put CEOs in the unemployment line.

SNL has been in this position many times before. The show’s most controversial incident, while not part of a prepared skit, was when Sinead O’Conner tore up a photo of Pope John Paul II to protest the Vatican’s handling of the child abuse controversy. That ignited a firestorm much bigger than this one.

SNL, to its credit, showed America and the world that it was okay to laugh again with its first live show that aired after 9/11. The opening included Mayor Rudolph Giuliani surrounded by two dozen firefighters and police officers. He thanked the heroes for their service, and when the show’s producer, Lorne Michaels, asked, “Can we be funny?” Giuliani shot back, “Why start now?” SNL will go on; people will move on.