As seconds were ticking off the clock and shots were falling for the Houston Rockets, the crowd at the Toyota Center knew that their team would make it safely into the second round of the NBA playoffs. However, with one tweet, their social media manager, Chad Shanks, ensured he would no longer be traveling with the team. A horse. A gun. Poorly chosen words. He put up the Twitter equivalent of an air ball, missing the mark so horribly that it hit an unsuspecting fan in the face. 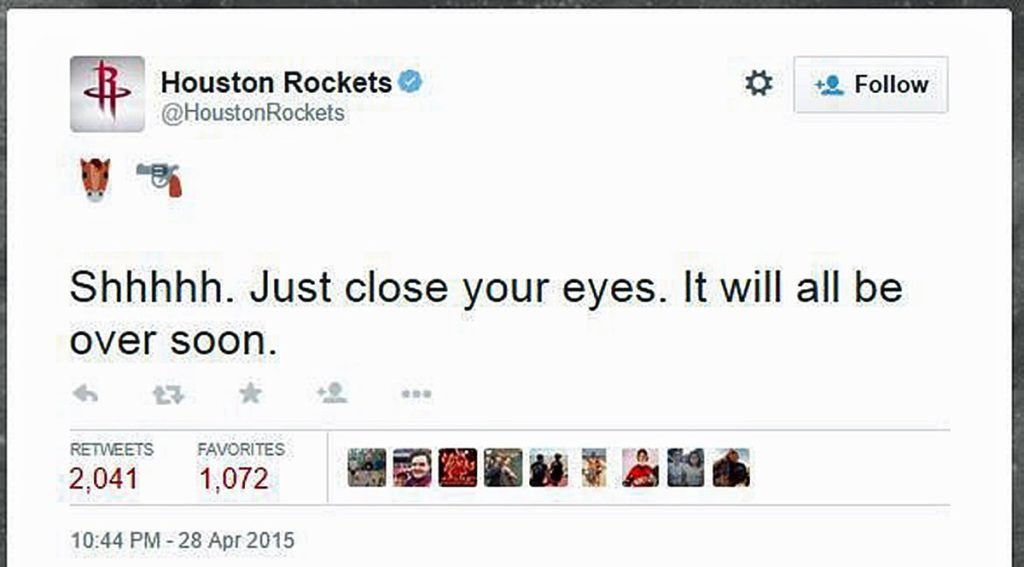 There have been plenty of people, like ESPN’s Dan Le Batard, who have come to Shanks’ defense, but the damage has already been done. Shanks enjoyed great success as the Rockets’ social media manager by incorporating playful gifs and memes to give the Rockets a unique voice among the 29 other NBA Twitter profiles. His biggest mistake, though, was forgetting where his voice ended and the team’s began.

It’s easy for die-hard fans to get wrapped up in the emotion of an NBA playoff game. Thanks to adrenaline, and maybe a beer or two, sports fans can do some really stupid stuff. At the end of the day, though, they’re just fans. Shanks lost sight of the fact he was connecting with Rockets fans as the voice of the franchise, not as the voice of another pumped up fan. All of this could’ve been avoided if the Rockets had social media guidelines clearly in place. Instead, they gave Shanks free reign over their twitter account, allowing him to post whatever he deemed appropriate, until finally, his sense of humor and theirs clashed.

GFM helps our clients avoid similar crises by developing social media guidelines though our Platform POV social mapping exercise. The guidelines focus on what sort of content should be posted on which social media platform, who is being reached, how success is measured and, most importantly, the voice of the client. If the Rockets had placed more emphasis on that last part, Shanks might still be sitting by the team as they begin their series against the Los Angeles Clippers. If you’re a social media manager in the NBA, the difference between being eliminated and making it to the next round can be as simple as understanding that your personal voice doesn’t necessarily work as the voice of the team.