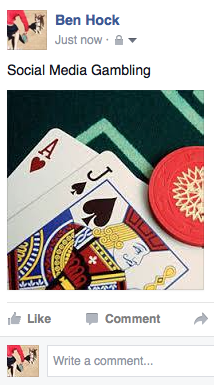 I recently survived a trip to Vegas with some college buddies. Here’s a small sample of the things I learned on this excursion: you can never be prepared for what you will witness at a Las Vegas swimming pool; never attempt to eat a Crave Case from White Castle unless you’re with at least 5 people; never split a Crave Case with the same people you’re sharing a hotel room with.

As a gambling novice, I also learned quite a bit about the different options, and my game of choice was blackjack. There were a number of dealers who, after working at the casinos for decades, could easily spot that I had no idea what I was doing. They guided me through multiple hands until they were certain I’d absorbed all I could about the probabilities and “smart” moves I should make. After a while, I was confident enough to offer my wisdom to a 21-year-old at the table who was celebrating his birthday. Things were going great. My first day in Vegas I was up $370 and felt like I’d beaten the system.

Unfortunately, I was still there for 2 more days, and my winnings quickly evaporated. One could argue that this is precisely how gambling works. You win once and assume you can easily replicate it, but the losses start to pile up and your chips dwindle. However, I argue that you can win in Vegas if you set strict guidelines for yourself. I realized post-Vegas that all of my losses occurred when I got over-confident in my ability to “beat” the system. I’d get a “feeling” and bet big money, or push my luck by taking an ill-advised hit. When I still felt like a scared novice, I only bet the minimum and stuck with a by-the-book strategy. I never had any huge swings one way or the other, but I ended up slowly winning a lot more money than I started with. A similar strategy can be used with your social media content.

Be sure that you have a consistent voice. If not, you might attract the wrong audience or confuse the audience you do want. Even if you post something that flops, at least it’s in line with who you are.

Don’t bet all your chips on one hand:

Sometimes you’ll post something that you’re certain will be a hit and it tanks. It’s easy to get disappointed when a post doesn’t pay off like you’d hoped, but other posts that seem insignificant might be winners.

Stick with what works, but don’t repeat yourself:

Consistency is important, but repeating yourself too much will repel your audience. I bet big money on a hand and got a blackjack. I bet the same amount of money on the next two hands and lost it all. Repeating the bet was a huge mistake. If you recycle the same language and images, your audience will get wise and feel like you don’t care or even worse, get bored. A response to a follower on Facebook shouldn’t be canned. Mix things up to avoid a bust.

Know when to stop:

I should’ve taken more breaks to sit by the pool or walk the strip, but my little successes lured me back to the tables. If I’d known when to stop I could’ve left the trip with an extra $370. Instead, I lost my winnings by spending too much time gambling. Don’t inundate your audience with too much content. Too many posts, tweets and interactions can suffocate your followers. Post frequently, but not too much. Knowing how much to post is just as important as knowing what to post.

Gambling with social media management will yield the same results as gambling in Vegas. Maintaining a consistent strategy and voice will help you “win” at social and make sure your “busts” don’t have a lasting effect.