Google recently unveiled their new logo to mixed reviews, but everyone has been focusing on what’s changed rather than what’s stayed the same. The one aspect of the Google logo that’s been consistent through the years is the playful sequence of colors. Those logo colors are so distinct that the typeface in the logo can easily change to reflect design trends without altering brand recognition.

Google’s departure from the serif typeface it’s used since 1999 was a big leap, but a necessary one. The way the company interacts with its audience has changed drastically since 1999, and the new wordmark reflects that. Though Google made small tweaks to the logo over the years to better mesh with the latest design trends, the new iteration reveals their intentions for the future.

With a plethora of devices and a variety of apps and services, Google reaches its audience in so many different ways that its identity has to be easily accessible. The new Google logo is soft, modern, playful and inviting. It’s a smart move for a company that owns so much personal information and pervades our everyday lives to have an identity that feels charming and safe. The gentle curves and consistent weight of the letters instill a sense of comfort that the old serif typeface didn’t have. Plus, Google’s made a version of the new logo that is only 305 bytes (compared to the old one at 14,000 bytes), which makes it easier to display on low-bandwidth connections. This all leads into Google’s goal to bring the internet and the Google brand to parts of the world that don’t already have it.

One of the most important aspects of the new logo, though, is what stayed the same. The colors are a little softer than before, but their use in the logo is Google’s greatest identifier. Google’s logo color sequence has been the same since 1998: blue, red, yellow, blue, green, red. The type treatment changed from Baskerville Bold to a variation of Catull, from shaded to flat, but the color sequence is the one constant, and the only feature that carried over into the new identity. The logo colors are far more important to Google’s brand than a typeface, and Google knows that. Any 6-letter word in any typeface using the same color sequence will automatically read as “Google” to anyone who’s used a computer in the last 16 years (see below). It’s an instantly recognizable pattern that allows Google to evolve while staying familiar and maintaining its already stellar brand recognition. The typeface can change, but color is so important to Google’s brand that it should always be a part of its identity. Without it, Google just isn’t Google. 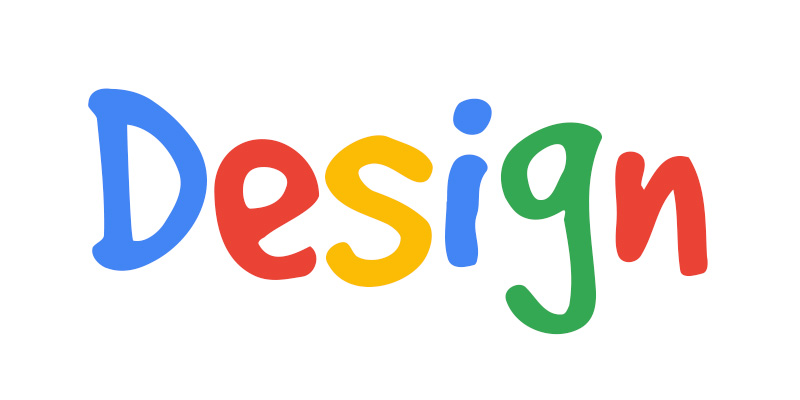