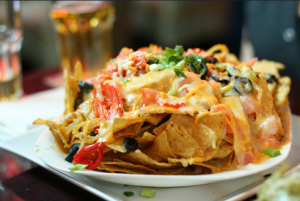 The Super Bowl… all the hype, celebrities, creative TV spots, half-time entertainment and yes, the football game. But what really makes or breaks the experience are the snacks that we’re all eating. 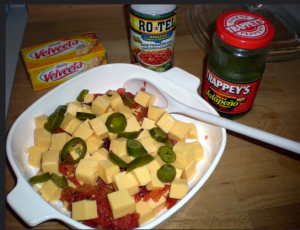 I polled my colleagues who hail from (and live in) different parts of the U.S. to find out what their favorite Super Bowl snacks are. Following is what they had to say. What will you be serving?

Alexis – California “Nachos! I like a LOT of veggies…tomatoes, peppers, avocado…, along with beans and good, regular cheddar cheese.”

Amanda – Texas “I’d have to go with chips and queso. Even better, you can go with Bob Armstrong Dip – which is basically queso with ground beef, sour cream and avocado mixed in – divine!”

Ben – Colorado “My favorite Super Bowl snack has been around for thousands of years. Without it, the pyramids might not have been built, many more people would’ve died in the Dark Ages and Martin Luther might have never posted his theses. This snack has sustained slaves, monks and kings alike. The snack I’m referring to is BEER.

I don’t drink the light stuff during the Super Bowl, though (or any time for that matter). The Super Bowl requires special beers, especially when your favorite team is in the big game. I’ll be picking up a few local craft brews for the event. GO DONKEYS!”

Brooke – Wisconsin “Us Sconnies gotta have our cheese, crackers and summer sausage.”

Carrie – Minnesota “You have to have turkey chili and Moscow Mules to wash the chili down.”

Emily – Michigan/Colorado “My daughter started making what she coined “Bronco-ritos”… basically little bean, cheese and tomato burritos. They have been lucky this year!”

Jim – Iowa “Technically my favorite Super Bowl snack is either BBQ Little Smokies or some form of homemade queso dip.

That said, if you’re looking for variety and want a little Midwest flavor, I’m a HUGE fan of Walking Tacos. Something about having your taco ingredients mixed with Doritos or Fritos, and in a portable bag, makes them that much more delicious.”

Rebecca – Hawaii “Without a doubt, poke (poh-kay) is the snack of choice. The lines at the grocery stores go out the door on Super Bowl Sunday.”

Rich – Oregon “Here in Portland, everything is artisanal, so here is a typical Super Bowl menu:

Trish – Wisconsin “OK – this may not be my most favorite Super Bowl snack, but in Wisconsin my parents often served pickled herring for good luck.”

Tracy – Oklahoma “Oklahoma City will have so much queso at parties that you might want to preemptively buy stock in whatever company makes Velveeta. The ingredients are Velveeta, Rotel, hamburger meat and sausage.”

Wendy – Wisconsin “Beer Cheese Soup! A MUST HAVE!”