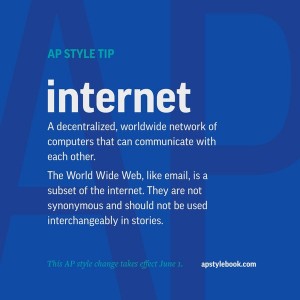 For all of the copy editors, grammar nerds, journalists and language style sticklers, there is news of a relatively big-ish change in the rules.

As of June 2016, The Associated Press, AP for short, is updating its rules to lowercase the words “internet” and “web” in all instances, including web page, the web, web browser.

The AP Stylebook is a media and business standby, and offers a guide in grammatical correctness and language nuance. What’s behind the change? Some wordsmith bloggers are saying that it marks the inclusion of the Internet (uppercase here since rules are not in effect yet) in our culture and expansion of the meaning of the word.

“Internet” was initially capitalized because it technically referred to the global network derived from the Pentagon’s ARPANET, considered the technological foundation for the Internet. It was a proper noun, and as we all know, proper nouns are pretty much always capitalized, blogger Maddy Foley informs us.

Today “the internet” refers to a worldwide network of computers and has become part of everyday language. “Downsizing ‘Internet’ is a signifier of that, our ability to communicate across huge geographical distances and cultural chasms. And that’s pretty freaking cool, you guys,” Foley says.

With the new 2016 AP Stylebook, there are 238 updates, but none of them are clearly as important as these two.