KIMYE VS. SWIFT: Communications Lessons from a Hollywood Feud

Home > Blog > In the News > KIMYE VS. SWIFT: Communications Lessons from a Hollywood Feud

By now, you’ve likely heard about the most recent public battle between Kanye West, Kim Kardashian West (Kimye) and Taylor Swift. If you haven’t checked Facebook, Twitter, Snapchat or any news sites in the last week (I won’t judge), let me catch you up: 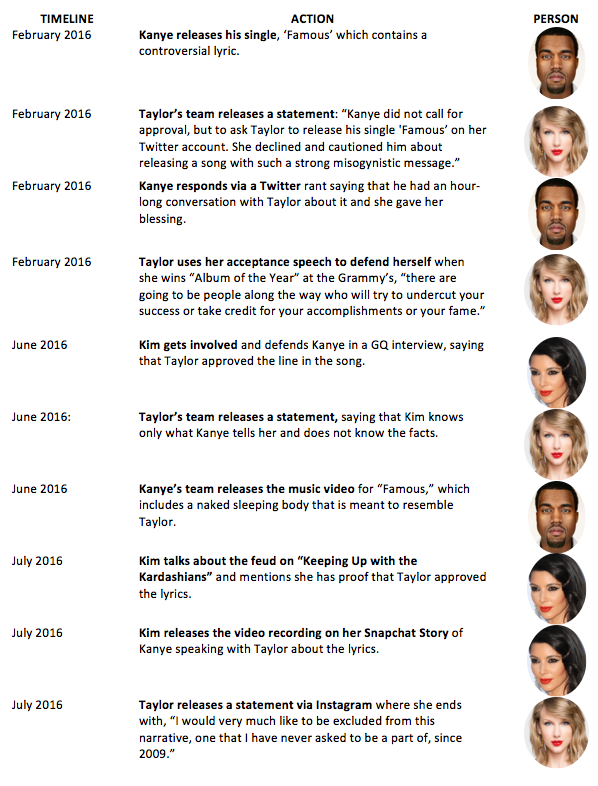 And… you’re officially caught up.

Undoubtedly, their feud provides fodder for entertaining…well…entertainment. But, I started to think about if there was anything I could learn from this latest Hollywood drama to 1) justify the endless hours I’ve spent reading about it and 2) challenge myself to think about this through a communications lens.

Here is where I netted out:

Kanye, Kim and Taylor have carefully curated narratives. Their narratives aren’t blatantly outlined on their websites. Instead, their narratives have been strategically built through their social channels and through their actions. As a result, part of Taylor’s narrative is that she is approachable, relatable and innocent while Kim and Kanye are more controversial, trendy and edgy. Their opposing narratives set the perfect stage for a compelling (juicy, if you will) feud that attracts media attention.

The takeaway: Build a narrative for your organization. It’s not the mission and it’s not the vision – it’s the story about what you do, who you are and what you stand for. A narrative will serve as the guide for all other messages and communications. When your audiences understand your narrative, they are more likely to support you along your journey.

“All Day:” TIMING IS EVERYTHING.

If you view the feud as part of a strategic launch of a new song, the Kimye team knocked it out of the park. At GFM, we talk about ways to sustain the momentum after a launch to ensure that there is a drumbeat of attention over a period of time versus just one moment in time. The Kimye team has managed to draw attention to “Famous” for 5+ months. They released it right before the Grammy’s, knowing Taylor would be there and likely win something. They took to social media after the Grammy’s to continue the fight, and Kim stirred the pot four months later as the music video was being released.

The takeaway: Understanding that whoever you are trying to reach is likely being inundated with content and information in their daily lives, think beyond the launch moment when you are developing a strategy. Look three – six months out and ask yourself, “how can we continue to communicate about the launch after the first moment in time?”

“Blank Space:” Facebook, Twitter, Instagram, Snapchat, Blogs, Vine, Pinterest, YouTube, LinkedIn. Those are just some of the platforms available to reach your audiences. Each platform has a different use and attracts different users. GFM’s sister agency, CenterTable, recommends developing a Platform POV before communicating on social. The Platform POV is a tool that the team uses to evaluate each platform and determine how each one should be used based on who you want to reach. Using social media correctly can be very impactful.

In the case of KIMYE VS. SWIFT, Kanye uses Twitter to lash out at Taylor. If he had combined all Tweets into a Facebook post, would people have read it? Maybe. Likely not. Kanye’s Tweets, because only 140-characters are allowed on Twitter – read like Kanye was yelling at Taylor. It felt like a real fight. Kim’s use of Snapchat Story to release the recorded video of Kanye and Taylor was genius. Given Snapchat Stories disappear after 24-hours, it created an exclusive element to the video. Once it disappeared, news sites were promoting that they had a copy of it – drawing attention to the video and the fight.

The takeaway: Social media is extremely powerful. Spend the time to understand who is using each platform and how they are using it. Tailor your social media communications to fit within the appropriate platform.

From this feud, we can be almost certain that [Kimye and Taylor] are never getting back together…at least not until there is a new song that comes out and they appear to make amends, drawing us back into the drama and back into their music.

Until then, you can decide… TEAM KIMYE or TEAM SWIFT?