A Visual Analysis of Trump and Clinton’s Twitter Accounts

Barack Obama is the first president to have a Twitter account (@POTUS), and it is clear that social media will continue to play an increasing and integral role in politics. This election cycle, no candidate has moved his tiny thumbs more than Donald Trump, whose 140-character rants have put him in the spotlight almost as often as his orange glow and atrocious comb-over. Though his tweets have often gotten him into trouble, he’s found a committed audience through social media. Hillary Clinton has also amassed a strong following on Twitter, though her tweets are wisely curated, unlike Trump’s stream-of-consciousness dumps.

As the two make their run at the White House, they’ve started to solidify their images, both in real life and the social media world. Trump utilizes fear tactics to scare people into believing he’s the only man for the job. Clinton has done the opposite by attempting to present herself as a friendly, relatable mother and grandmother who is focused on our children’s futures. While it might sound strange, their Twitter profiles play an important role in maintaining these appearances. Their Twitter profile images and headers offer undecided voters a glimpse into how they view themselves. Screenshots of their profiles (as of 07/29/16) are below: 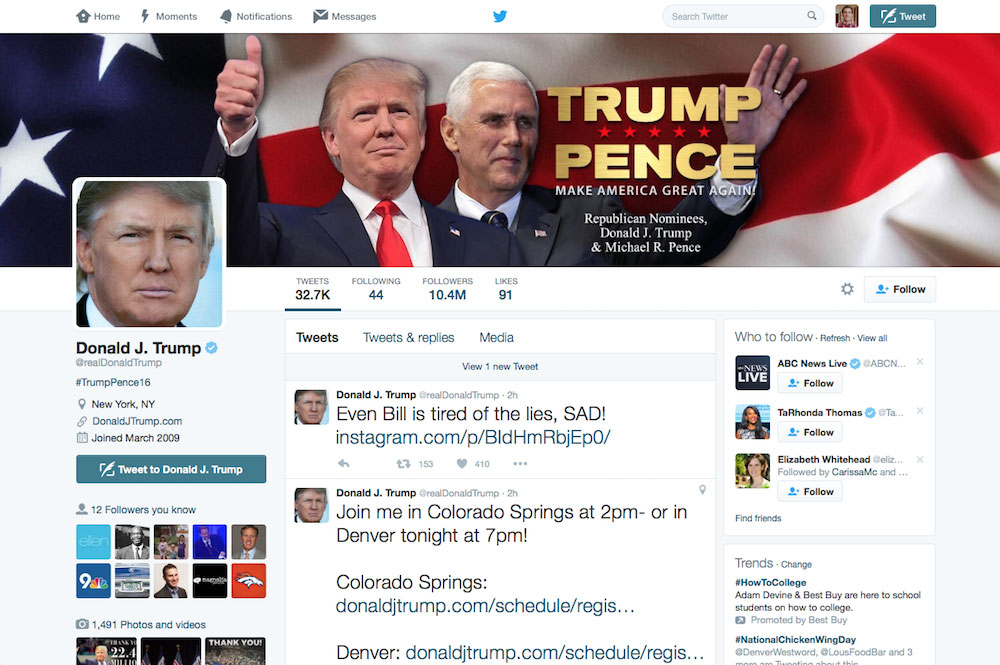 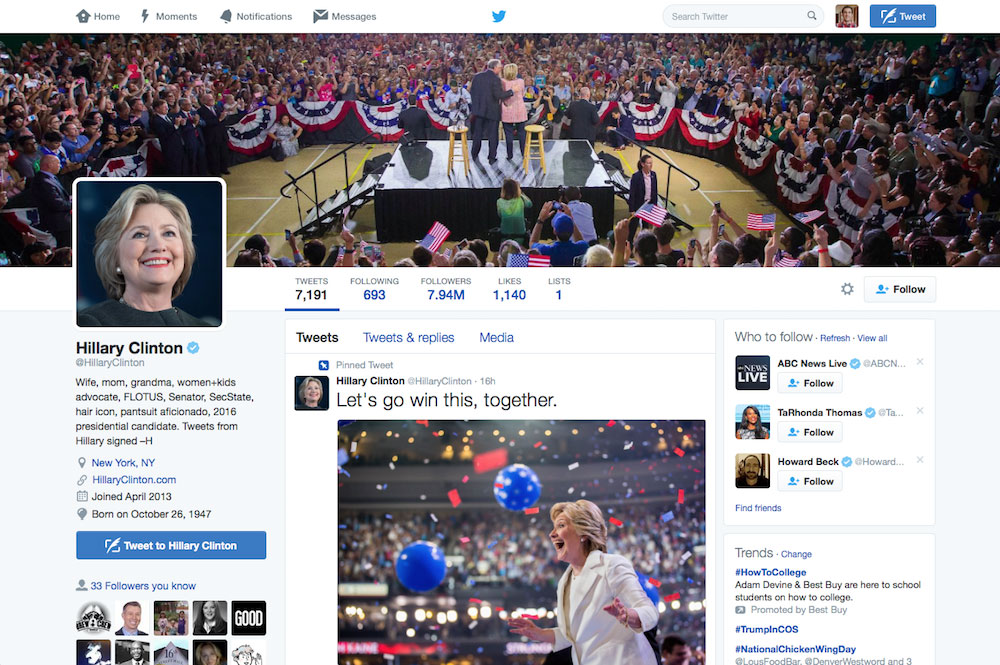 Notice the severity of Trump’s propaganda style header image. He and running mate Mike Pence are barely smiling. Their names are presented boldly over their amateurishly photoshopped bodies, which are resting patriotically above a flowing American flag. The header attempts to convince the viewer that these two men are the only answer. They’re not only unapologetically “real” Americans, they’re powerful and have the conviction to save America.

Clinton’s profile offers viewers a synopsis of what we heard at the Democratic National Convention: she is friendly, and we will all play a part in keeping America great. In contrast to Trump’s severe grimace, Clinton is shown with a hopeful smile as she looks toward the future. Her header places the focus on the crowd of supporters more than on herself and running mate Tim Kaine. With her back to the viewer, Clinton shows the strength of unity. Clinton gives the viewer the sense that her supporters make her great. This message is further emphasized by her pinned tweet, which reads, “Let’s go win this, together,” and is paired with an image of Clinton looking energized and ready for the challenge.

Though their Twitter profiles aren’t the only medium for Trump and Clinton to sway voters, social media does provide an important opportunity to reinforce their images. We won’t know who will win until November, but it’s obvious that both candidates understand the power that social media affords them to advance their political agendas.