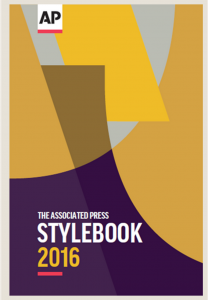 In today’s 140-character world, does AP Style still matter and why should I care? It depends who you ask. The truth is, AP Style does matter and is the standard in the U.S. if you’re a journalist, writer or work in public relations and marketing communications. If you’re not familiar with the AP Stylebook, it’s a “reference for writers, editors, students and professionals. It provides fundamental guidelines for spelling, language, punctuation, usage and journalistic style.”

While the AP Stylebook has been around since 1953, each June it releases a new printed edition and is available online for an annual subscription. For longtime AP Style followers, sometimes the updates make you crazy, like now that it’s acceptable to use “over” as a synonym for “more than” i.e. “She earns over $30 million a year” versus the old way “She earns more than $30 million a year.” It’s just as important for longtime users to stay up on the changes as it is for new writers to become intimately familiar with the guidelines.

According to its press release, the 2016 changes include:

AP quickly jumps on the news of the day with its Topical Guides found on the website for free (As of this writing, it’s the 2016 Olympic Games in Rio – Rio is acceptable on first reference.)

Many of the top journalism schools offer helpful writing and grammar tips, as well as links to the most common AP Style entries: Purdue Online Writing Lab is a useful source, and the Columbia Journalism Review evaluates the latest entries when the new edition is released.

Who decides what is updated each year? AP Stylebook editors continually monitor language usage in the news throughout the year for trends and new topics (Brexit – was created on June 22, 2016). As language in social media, business, sports, etc. evolves reporters and editors will make recommendations to a Stylebook team.