Twitter’s Moments feature may finally be worthwhile for brands 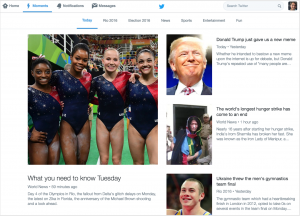 Twitter’s Moments feature, a curated tweet slideshow around a single topic or story, was announced and launched a little more than a year ago with barely a whimper, even after the social media platform added a Moments button to the footer of the mobile application. But an announcement earlier this month has created a new opportunity for brands to use the tool other than purchasing ads seen by dwindling numbers.

Twitter is now allowing a broader group of creators to curate and implement Moments, including influencers, partners, brands… and in the coming months it will be open to everyone.

Click to explore every detail of the America can in all its glory. #ThisBudsForYouhttps://t.co/FS25yZ5Lj3

The example above shows how Twitter will allow brands to curate and customize Moments to create a new multimedia experience significantly more engaging then just asking users to follow a hashtag.