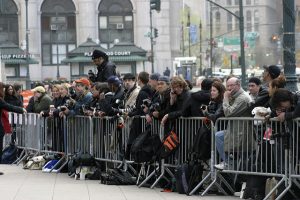 Not surprisingly, Americans disagree about how the media cover the news, and what they believe are the media’s best and worst traits. According to a Pew Research Center study that was conducted in early 2016, Americans were asked to share what they thought were the most positive and negative things the news media do.

The most positive thing the media do, according to 30 percent of respondents, is to report the news. Next, 25 percent say the media provide a public service, like providing information or serving as a watch dog. Last, people say the media share uplifting stories (8 percent).

And the most negative thing the news media do, according to 35 percent of Republicans is report biased news. (This may not be surprising given that mainstream media has long been accused of being left-leaning.) On the other hand, 25 percent of Democrats believe that the worst thing the media do is make bad choices in what they report (non-news).

And now, nine months after this survey was conducted, as we’re inundated nearly 24-7 with election coverage, it would be interesting to see how perceptions may have changed. When we return to “normal” on Nov. 9, 2016, will we see a return to the sensational? Will Americans continue to tune in to local and national news for topics other than sports and weather? And as my colleague recently pointed out in her blog ,Don’t Forget the Good News, don’t we all need a little more of the positive news that just makes us smile?