Fake News vs. Real News – How Can You Tell the Difference?

Home > Blog > In the News > Fake News vs. Real News – How Can You Tell the Difference? 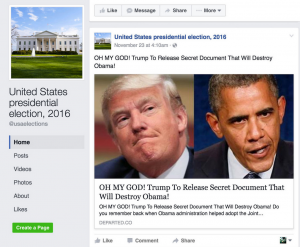 There was a lot of news coverage of “fake news” leading up to and following the recent presidential election, but after doing some digging, it became clear that fake news and fake news sites are nothing new.

And it’s not just fake news that’s getting attention. I came across a story about how a police department in Central California issued a fake news release to the media to protect a person who was sure to be killed by rival gang members. Many in the local media were highly critical of the police’s actions, but the Santa Maria police made no apologies.

In an ever-shrinking media landscape with fewer and fewer “real” media and reporters, how do you tell real from fake news? The New York Times covered this topic in an appropriately titled headline: Inside a Fake News Sausage Factory: ‘This Is All About Income’. The article covered how a computer science major from Georgia (the country), started creating fake stories about Hillary Clinton on a website he set up, and watched his Google ad sales soar as more and more people found the site. He really started making money when he began creating content about Donald Trump.

Both Google and Facebook had to step in and address the issue of fake news. Google said it would ban websites that use fake news from its advertising service. Facebook is blocking links to fake news sites and is now patenting a tool to automate the removal of fake news.

How to Spot a Fake News Site

National Public Radio’s “On the Media” podcast recently covered the topic of how to distinguish fake from real news: Breaking News Consumer’s Handbook: Fake News Edition. They interviewed, Melissa Zimdars, a professor of communication and media at Merrimack College. She said that how a news site is designed can be a huge sign of “fakeness.” Is the site in all caps? Does it use exaggerated Photoshopped images? Are the domain names just a little off, like instead of msnbc.com, it’s msnbc.com.co. Zimdars also suggests looking at the “about us” section of the website (if there is one) and checking to see if there are Wikipedia pages. Check out Zimdars full list of tips for analyzing news sources.

As communicators trying to secure coverage for our organizations or clients, it’s more and more challenging with fewer news outlets and reporters, but now we’re competing with sensationalized fake news, and it’s not the obvious stories of Loch Ness Monster sightings or alien abductions that were covered in the likes of the now shuttered News of the World. It will be interesting to see how the fake news saga shakes out and if we’ll ever be able to trust what’s being reported again.