Now in its seventh year, Colorado Gives Day, the brainchild of the Community First Foundation and FirstBank, promotes giving to all registered Colorado nonprofits over the course of a 24-hour period each December. This year, it fell on Dec. 6, and ended up raising a record $33.8 million for great, local causes across the state.

Having been the beneficiary of some extensive and successful awareness campaigns, Colorado Gives Day has vastly improved charitable giving in a state that was once ranked 37th in the nation in contributions to nonprofits. That said, Colorado Gives Day has become so big that many in the marketing and communications sectors have almost come to lament the email and social media barrages that come with it.

So this year, we looked for nonprofits who rose above the din with creative social media strategies seeking to amplify their fundraising efforts. These three stood out:

HOPE for Longmont uses Facebook consistently over the course of the year, which has helped them grow their follower count just over 1,000. That’s a respectable number, but certainly not one that’s going to ensure they stand out in a crowd of 2,111 Colorado nonprofits. Rather, it was how they used that audience and leveraged their strongest platform that helped them do just that.

HOPE specifically identified their goal of raising $22,000, they celebrated donors in real-time when the money came in and they recruited local community influencers with significant followings to help spread their message. The end result? HOPE not only met their lofty fundraising goal of $22,000, they exceeded it by $4,000. 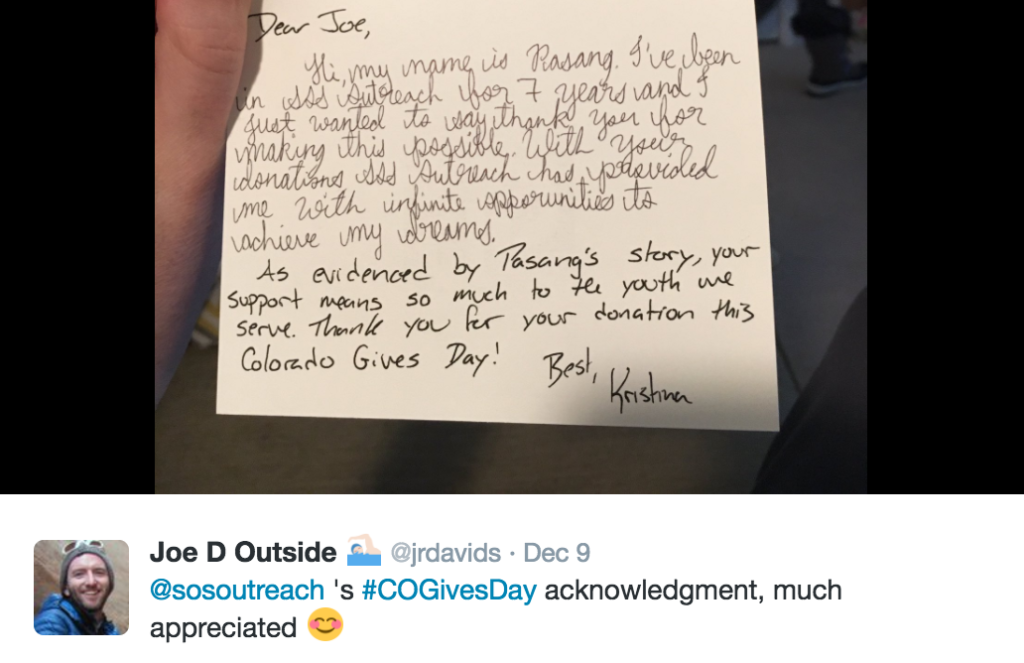 While handwritten notes may not seem like a social strategy, they can swiftly become just that if they end up on Twitter and Instagram — and especially when they’re being posted by the people who received them. Such was the case with several of the notes sent to donors by SOS Outreach, a national nonprofit based in Vail that utilizes outdoor adventure experiences to inspire positive decision making for at-risk kids.

SOS Outreach’s notes included personal thank yous from program participants, which encapsulates something we often tell our clients: Instead of asking your audience to mention your brand on social media as part of a contest or promotion, create content that is engaging enough that your they’ll want to organically engage with it on their own. The end result of SOS Outreach’s Colorado Gives Day campaign? A lot of handwritten notes, as they exceeded their goal of of acquiring contributions from over 200 donors.

Creativity meets quantification meets incentivizing meets leveraging influencers in the Morgan Adams Foundation’s Instagram campaign for Colorado Gives Day. While the foundation, which works to fund pediatric cancer research, doesn’t have a massive follower count on Instagram at just 321, they were among the loudest voices under the platform’s #COGivesDay hashtag throughout the day.

The foundation illustrated their donors as cows and dubbed them part of their #HerdOfHeros. That fit nicely within a larger theme the foundation developed with a local Chick-fil-A, which gave free meal cards to all donors and also sent their mascot out to take pictures and join in the on-site festivities at Morgan Adams’ offices. And here’s the best part: After finding out about the campaign, Chick-fil-A’s corporate offices authorized the free meal cards to be used at all locations nationwide.