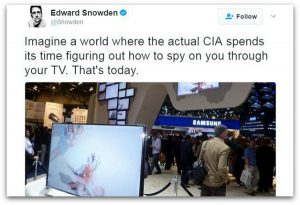 In an unprecedented leak of C.I.A documents, WikiLeaks released on Tuesday thousands of pages describing software tools and techniques used by the agency to break into smartphones, computers and even Internet-connected televisions.

For companies around the world, this should be setting off alarm bells. If the CIA can get hacked, what about you? GroundFloor Media’s Gil Rudawsky offers some advice to a reporter Ragan.com.

Organizations can perhaps mitigate the damage of leaks by having a plan in place to respond when they do happen, says Gil Rudawsky, vice president of GroundFloor Media.

“This is another alarm bell for all clients dealing with sensitive information that anything you say or email can potentially become public knowledge,” Rudawsky says. “If the CIA can get hacked or has a leak, what about businesses that spend millions of dollars less on maintaining secrecy of proprietary information?”

Read the entire article and what it means to your company.