Home > Blog > In the News > Click Bait and Misleading Headlines 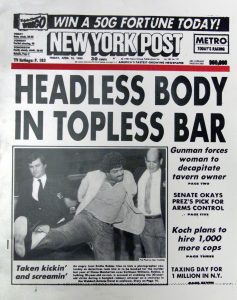 We’ve written about media click-baiting in this space before. Recently one media outlet came out with a defense of the digital trickery, although they wouldn’t go as far as to call it what it really is – click bait.

Can I write this without sounding creepy? News organizations (many of them, anyway) track what you read and what you don’t.

“It’s changing how we do journalism,” said Sacramento Bee opinion editor Joyce Terhaar. “So what works – and what doesn’t? Provocative headlines.”

The out-of-control trend among media outlets is to sell their stories with sensational headlines that don’t necessarily reflect the content of the actual article. And in a growing number of cases, they use salacious content that has little to no news value simply to generate clicks. These clicks are then used to set advertising rates.

When I was an editor at the Rocky Mountain News, we kept a tally of the most clicked on stories of the day. For instance, any story about the unsolved murder of Jon Benet Ramsey drove clicks through the roof. Just put her name in the headline, and start counting the clicks, often times in the millions. Westword even called us out on it, coining us the “Ramsey Mountain News.”

We were often dismayed when an important news story, with wide reaching implications for the community, didn’t fare well on the click meter.

Through it all, while we marveled at the immediacy of what people were interested in, I believe we never overtly tried to exploit it. If it was important news, we covered it regardless of whether people would click on it. That said, our copy editors did attempt to make engaging headlines. That’s been their job even before the Internet. A catchy headline can make a story, and sometimes that means bending the truth or forgoing some balance. With the death of print news, and the explosion of online news and frenzied competition for clicks, those tractor-beam headlines are even more important.

For what it’s worth, Sacramento’s Terhaar does offer a bit of wisdom on the practice:

“The quality measurement matters. If we can write a headline that gets your attention, but the story doesn’t deliver, we’re not doing our job. That would be click bait, which ought to be the bane of every journalist on this planet.”