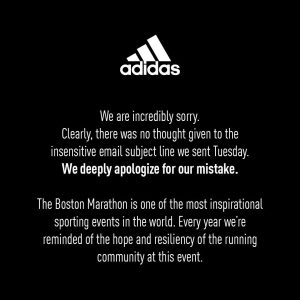 Here is a recap of the some of the best crisis communications gaffes, courtesy of PR Daily and Meltwater, that you may not have heard of. Be sure to check out the takeaways at the end.

Shea Moisture
This company featured a series of television commercials that profiled different types of hair types, but unfortunately they showed a limited number of minorities in their ads. They issued an apology: “We really f-ed this one up. Please know that our intention was not – and would never be – to disrespect our community, and as such, we are pulling this piece immediately because it does not represent what we intended to communicate.”

Adidas
In a tone-deaf blunder, Adidas sent an email out Boston Marathon participants with the subject line: “Congrats, you survived the Boston Marathon.” It didn’t take long for them to apologize, and the crisis dissipated.

Juicero
Bloomberg news showed how a $400 Wi-Fi-enabled juicer was basically just a ruse, in a video showing a person producing the same amount of juice as the specialty juicer. Reporters were able to wring 7.5 ounces of juice from the specialty packs in a minute and a half. The machine yielded 8 ounces in about two minutes. The startup this week cut its staff by 25 percent, and it offered customers refunds.

Fyre Festival
Billy McFarland and Ja Rule launched a luxury music festival at a private island in the Bahamas, and tickets ran from $2,500 to $250,000 for “deluxe” packages. Instead of the promised extravagant catering, beach yoga sessions, bikini-clad models and yachts to lounge on, attendees found a “disaster tent city” with scant rations. Instagram photos documented sorrowful bread-and-cheese sandwiches and dreadful accommodations. Social media users had a field day mocking the woes of the well-to-do audience and the downfall of the much-hyped event. A criminal investigation is under way and lawsuits abound. Ja Rule’s response: The whole world knows Fyre’s name now,” he said. “This will pass, guys.”

Takeaways
With any crisis situation, including the ones above, having a response plan beforehand can help, and listening and responding to social media in real-time can help turn the tide. Keep these points in mind:

As marketers and public relations practitioners, we’re always interested in understanding how to change public opinion, and there may not be a more dramatic shift than gay rights in America over the past 15 years.