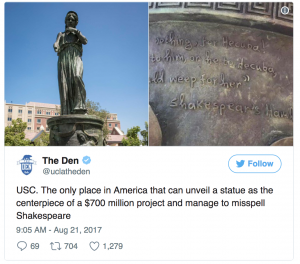 Negative media and social media coverage abounds, but in increasingly rare instances clients can turn potentially bad news into a positive or at least a learning opportunity.

Sometimes all it takes is a bit of creativity and humor to mitigate an issues management headache. Case in point, recently the University of Southern California unveiled a $700 million project in the heart of Los Angeles. Students from rival University of California at Los Angeles were quick to point out that a statue serving as the centerpiece of the development misspelled the name of “William Shakespeare” by leaving out the last “e” in the bard’s name.

The Tweet that followed: “USC. The only place in America that can unveil a statue as the centerpiece of a $700 million project and manage to misspell Shakespeare.”

Not taking the bait and issuing a stodgy response, USC issued the following statement:

“To E, or not to E, that is the question. Over the centuries his surname has been spelled 20 different ways. USC chose an older spelling because of the ancient feel of the statue, even though it is not the most common form.”

And with that response, the Twittersphere has been weighing in on the debates, with scholars pointing out USC might have a point. Even in his last will and testament, Shakespeare spelled his name two ways (both with an “e” and without an “e”). Also, printed programs from 1664, spelled the name without an “e.”

The Washington Post even had fun with the issue, saying visitors to the University of Southern California might be muttering, “What fools these mortals be,” as they stroll past a statue of the legendary queen of Troy and notice William Shakespeare’s name seemingly misspelled at the base. “To USC officials, it’s much ado about nothing.”

(GroundFloor Media’s Gil Rudawsky is a proud graduate of the University of Southern California.)

As marketers and public relations practitioners, we’re always interested in understanding how to change public opinion, and there may not be a more dramatic shift than gay rights in America over the past 15 years.