360 Video: To Gimmick Or Not to Gimmick 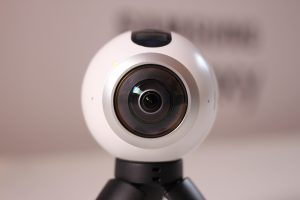 Technology is a fickle beast that can really creep up on you. One minute you’re blissfully content that two-day deliveries exist, and next thing you know, there’s shoes that order pizza and hoverboards that don’t actually hover and function as boneless scooters (turns out keeping wheels on things is still one of the best ways to keep your face from eating concrete).

The advent of 360 cameras was one of those things that crept up on me. From 16 GoPro camera rigs to smartphone clip ons, companies are constantly innovating the way consumers are telling their stories. However, like the proverbial cynical caveman that I occasionally am, the discovery of fire has left me wondering about the best ways to use it.

If you will allow me to talk nerdy for a bit, 360 video comes in two flavors: monoscopic and stereoscopic. Stereoscopic usually involves two cameras shooting per field of vision, or one camera mapped to each eye to create an illusion of depth. This technology is implemented through headgear VR technology like the Oculus Rift and Google Cardboard. Monoscopic video is one equilateral image stitched together from various lenses or sources into a seamless shot. These are the videos/photos that are most commonly seen online. Clients and consumers alike tend to favor monoscopic video because of its affordability and practicality.

Regardless of how cool it is that this technology is so readily available to professionals and consumers alike, 360 video is not immune to the pitfalls of gimmicks. Do I really need a monoscopic virtual 360 tour of a prehistoric world if most of the video consists of the cockpit that my shapeless self is “sitting” in? The practical implementation of 360 video must be considered from a point of its purpose and functionality.

Unlike most other cameras, 360 cameras are not a point and shoot operation, which means the traditional rules of video production don’t necessarily apply. While traditional video takes the audience’s eyeballs and places them within whatever frame you choose, 360 allows those eyeballs to roam freely. Keeping this in mind, there are a few things I have encountered in the field that have helped dictate my approach to 360 video.

As of now, Youtube, Facebook and Vimeo all support viewing and uploading 360 videos, Google created a 360 animated short film that was nominated for an Oscar, and I once live-streamed two minutes of myself in 360 sitting at my office because I could. What a time to be alive.

For a much more in-depth and comprehensive look into the fundamentals of 360 video, consider checking out the plethora of knowledge and resources that Vimeo has to offer.

Also, be sure to check out some of the 360 work that we did recently for Wheat Ridge Animal Hospital.