How Client Video Screenings Save You Time (And Sanity) 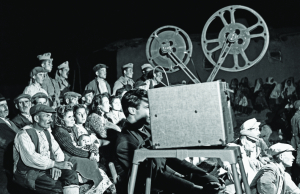 For every producer who has written “Version 14” next to a video you’ve passed along for client review, this blog post is for you.

It’s no secret that the video editing process for clients can be exhausting and redundant. Though we certainly realized this universal truth before, it became all the more clear to us when we acquired the video production company now known as CenterTable Studios earlier this year.

It was after housing an out-of-town client in our office to work on a video project that it donned on us: The editing process became a whole lot easier when we were meeting with a client face-to-face.

That was the moment client video screenings were born.

Since then, we have purchased a spiffy miniature projector and a handy foldable projector screen that we can now take directly to clients to screen and review their video projects in the comfort of their offices.

But these sessions are about more than sitting down, watching a video and busting out the popcorn — though we do usually bring popcorn with us. These are highly intentional sessions that set out to achieve specific objectives.

And I’m happy to report that since we’ve instituted these client video screening sessions, we’ve been able to cut the average number of video revisions we’ve been executing nearly in half, saving our clients money and our video editors from pulling out chunks of their own hair.

When you ship a video off to a client to review on their own time, one of several inherent obstacles — and often times all of them — tend to take occur:

All of these obstacles can be adequately addressed during in-person screening sessions.

When possible, we like to start screening sessions by watching the video from beginning to end. After that, we ask for gut reactions. Did you hate it or love it? Is it too long or too short? Did the right messages get conveyed or are we missing something?

You’ll be shocked at how many people complete that first viewing and say, “It looks great!” Don’t fall for this trap. Because the second you leave and give your client the video, they’ll watch it again, find things they don’t like and before you know it, you’re right back to “Version 14”.

So after the first full viewing, walk your clients through the video section-by-section, taking them up through natural breaks and then pausing — we usually aim for 15- to 20-second increments. Each time you pause the video, ask your clients if they have any feedback — positive or negative — about that section.

Believe it or not, you’ll want to get them talking during these breaks and you may need to be prepared to jumpstart the discussion. Chances are that as the video producer, there’s something about each section you either like or are unsure about. By bringing up those points, you may be able to tag-team a solution to problem sections, realize you were worried about a problem that didn’t exist or glean something about your client’s video preferences.

Educate Your Client About Editing

Each round of editing takes time, and that ultimately gets paid for out of your client’s budget or your own personal sanity. Not all clients understand this.

Case in point: To your clients watching the video on their own, cutting two seconds of b-roll they don’t like probably seems like a quick fix. But when you’re there in-person to tell them the reason you kept that b-roll is because it covers a moment when the interview subject was picking his nose, and that eliminating that b-roll means having to change the entire soundbite — and that changing the entire soundbite will likely take two hours of your time and funds out of their budget — they may ultimately decide they’re OK with keeping those two seconds of b-roll.

In a more general sense, there may be certain stylistic decisions you made for reasons that aren’t immediately apparent. By being there in person to explain them, sometimes you can collectively agree with on a choice or amendment and eliminate the need for a lengthy back-and-forth via email.