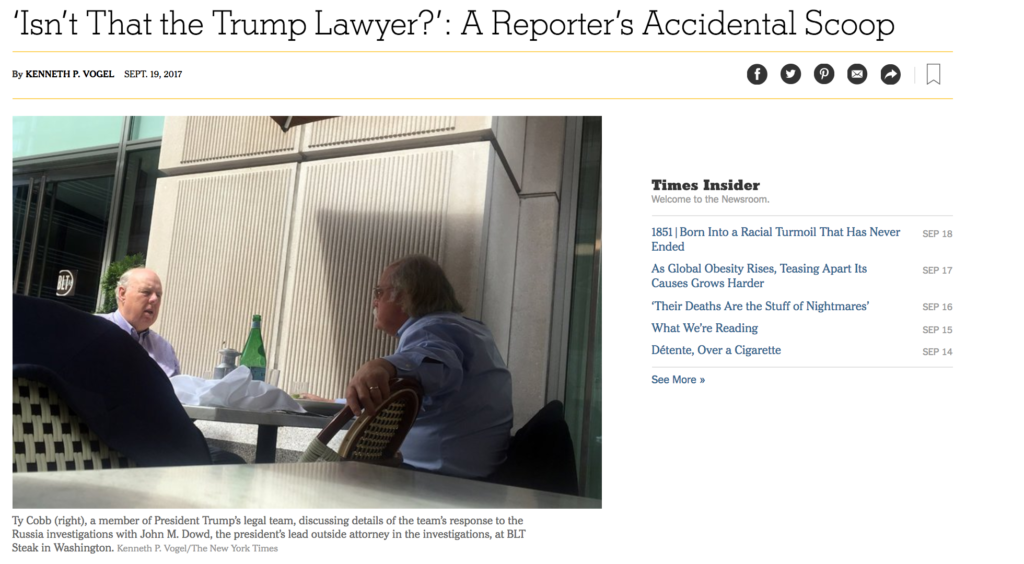 As part of crisis communications training with our clients, we emphasize that unless you are in a closed-door office or in a private location, anything you say in public can be used against you. This lesson, once again, resonated loud and clear in a Sunday New York Times scoop.

Last week, Denver attorney Ty Cobb who now works for the White House to coordinate its response into investigations into Russia’s connection with President Trump, was having a strategy lunch with the president’s lead outside attorney on the Russia investigations, John Dowd.

Little did they know, a Times reporter was also having lunch, at the next table.

The reporter identified Cobb and Dowd, and proceeded to take a photo and notes on the entire strategy discussion, and then reported on it. How the entire scoop played out was detailed in a follow-up article by the reporter.

“They were in a public place where they could have been overheard by anyone. I just happened to be a reporter, and I did not misrepresent myself, so I figured their conversation was fair game. I ordered another iced tea, pulled out my phone and began typing out notes, hoping that they would assume I was merely responding to emails, tweeting or surfing the internet,” Times reporter Kenneth Vogel wrote.

Acknowledging being at the right place at the right time, the Washington Post said: “It is every Washington reporter’s dream to sit down at a restaurant, overhear secret stuff and get a scoop.”

As a former reporter, some of my best scoops came from seeing documents on peoples’ desks, overhearing conversations and getting access to public records. For instance, I learned about a pending public offering for a company in an elevator, overhearing a conversation. Like it or not, we cannot expect any semblance of privacy out in public, so take your sensitive conversations behind closed doors.