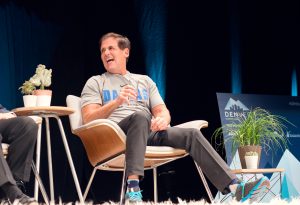 I had the opportunity to attend one of the more than 350 sessions that were part of the 2017 Denver Startup Week. Now in its sixth year, Denver Startup Week is the largest free entrepreneurial event of its kind in North America, and is one of the best resources in the nation for those looking to start or grow a business, or in my case, to learn from the best in business.

One of the sessions I attended, “Chinese Rockets and Disco Dance Lessons: The Art of Reinvention – A Night with Startup Visionaries Charlie Ergen, Mark Cuban and Brad Feld,” was highly entertaining and included a candid discussion with successful entrepreneurs.

While admittedly I’m not an entrepreneur, I’m in awe of gutsy business leaders who just go for it and live their dream. Charlie Ergen is the co-founder of Dish Network; Brad Feld runs the Foundry Group, a Boulder venture capital fund; and Mark Cuban is the billionaire owner of the Dallas Mavericks and star of “Shark Tank.”

While their paths to success were all different, they share the same passion for business and lifelong learning. A few nuggets from the discussion:

Finish School: One of the questions from an audience member was whether he should finish college or not. Cuban was adamant about finishing college. He emphasized the need for entrepreneurs to understand every aspect about business including sales, marketing, accounting and finance.

TV Advertising Needs to Change: Both Ergen and Cuban had interesting takes on the state of TV and advertising. They lamented that watching live football is torture. For every kick off, change in possession, time-out, etc., the viewer is forced to watch two-and-a-half minutes of commercials, unless you’re like many Americans who don’t watch TV live, but rather on their DVRs. Dish was sued for pushing commercial-free DVR service in 2012, and Ergen told the crowd that he’s the most hated man in Hollywood.

Trump is a Twitter Troll: Out of the entire one and a half hour discussion, which was full of great stories, lots of laughs and business lessons for the crowd, The Denver Post chose to zero in on Cuban’s comment in its headline and coverage. That’s called click bait or the sensational headline to draw in the reader. Yes, Cuban said it, but he also shared other fascinating stories that surely would have been more interesting to Denver Post readers.

The 2017 Denver Startup Week drew a record 18,800 registered participants (far surpassing the goal of 15,000), and it continues to shine a national spotlight on Denver and Colorado’s highly educated workforce and entrepreneurial successes. If you haven’t had the opportunity to participate, look for Denver Startup Week next September 2018 in what will be another fascinating experience for participants.