We Trended on Twitter, and This is How We Did It

Home > Blog > Social Media > We Trended on Twitter, and This is How We Did It 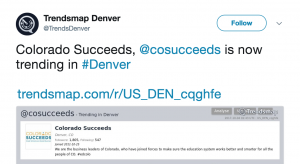 We’ve all been there: Your client wants his or her message, product or event to trend on Twitter, the account they’re using doesn’t have a lot of followers and you don’t have immediate access to Justin Bieber to lend your hashtag a hand.

So what do you do?

We were faced with this scenario earlier this year working for our hard-nosed clients at Colorado Succeeds. Tell this scrappy education nonprofit they can’t accomplish X, and they’ll have accomplished X, Y and Z in the time it takes you to lay out the case as to why they’ll never accomplish X.

So naturally, it was a goal for them to gain trending status for their inaugural Succeeds Prize, a first-of-its-kind live awards show for teachers set to be broadcast live from the University of Denver by KUSA, Denver’s NBC affiliate and market leader.

So where did we start? First, we went straight to the source to find out how Twitter defines trending. This is what we found word-for-word, as put forth by the platform in 2010:

What is a Trend?

Twitter Trends are automatically generated by an algorithm that attempts to identify topics that are being talked about more right now than they were previously. The Trends list is designed to help people discover the ‘most breaking’ breaking news from across the world, in real-time. The Trends list captures the hottest emerging topics, not just what’s most popular.

What Makes a Trend a Trend?

Twitter users now send more than 95 million Tweets a day, on just about every topic imaginable. We track the volume of terms mentioned on Twitter on an ongoing basis. Topics break into the Trends list when the volume of Tweets about that topic at a given moment dramatically increases.

With that being vague, we looked for a little more substantive detail, and found the following directly quoted hypothesis across the internet:

In other words, the trending equation is far from scientific, and likely a question of time and location as well as volume of tweets and unique users interacting with your tweets.

With all of that in mind, we laid out the following, entirely-organic strategy for achieving trending status for the hashtag, #SucceedsPrize, on the night of the event, Oct. 3, 2017.

While we expected a packed house of nearly 1,000 people, we knew that number in and of itself was not going to gain us trending status. With that being the case, we set out to build a trending strategy that focused on producing the most engaging tweets possible, feeling that gaining our hashtag a high amount of retweets and likes would be our best chance at getting it noticed by Twitter’s trending algorithm. And in order to do so, we produced a bevy of pre-populated tweets with visuals, knowing that according to Twitter, photo tweets see a 35 percent boost in retweets while videos tend to see a 28 percent boost.

Our strongest influencer was KUSA, known to Denverites as 9NEWS, as they had a following of 400,000 strong on the Twitter. Knowing they wouldn’t be able to help us all night, we developed 10 tweets for them to announce their pre-event interviews as well as all the award winners throughout the night, and then sent them photos of the winners shortly after they were announced, knowing live photos would help with our individual tweet engagement. That undoubtedly helped, but interestingly enough, it was our effort to leverage smaller influencers — namely all of the schools and teachers nominated for awards — that produced the most engaging tweets. In fact, one of the most retweeted hashtag mentions of the night came from a teacher with less than 90 followers.

We built out a series of scheduled posts throughout the day to begin building awareness about the evening’s festivities, mentioning our targeted influencers whenever we could to get the hashtag and messages on their collective radars. But we saved our most compelling content and the majority of our time for the three hours when the event would be broadcast live, knowing that was our best chance to reach a critical mass of tweets in a small enough window to trend. So not only did we blast out 15 tweets per hour from the @COSucceeds account during that span, we worked with the Colorado Succeeds staff to produce consistent tweets from their personal accounts, plastered the hashtag across the event space to make it easy for others to join in on the tweeting and responded to every tweet that mentioned the hashtag with another tweet that included the hashtag, doubling the bang of our third-party influencer buck.

How’d we do? We saw approximately 500 tweets mentioning #TheSucceedsPrize during our three-hour event window, and we achieved trending status for the hashtag in Denver just as the show was going off-air at 10 p.m.

This is a guest blog by organizational consultant GG Johnston, president of Downstream Partners. No … Read More >