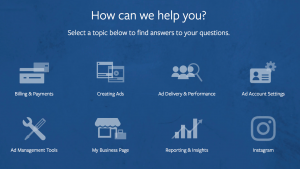 In the last seven years of social media work, I’ve needed to contact Facebook just a few times. Most issues can be resolved by Googling the problem, waiting it out to see if it fixes itself or finding a workaround. But in those rare cases where you’ve got an issue with your business or organization’s Facebook page that requires you to talk to an actual person who works at Facebook, it can be maddeningly difficult to contact someone. Unfortunately, I don’t have the Facebook technical hotline number to hand out, but I do have a few suggestions that have eventually worked for me.

If you’re having a random Facebook problem, first make sure that you’ve attempted to Google it to see if there’s an answer out there. Often a search will bring you to the Facebook Help Community, which can be a morass of unanswered questions. But it will at least give you a sense of how many other people are asking the same thing and when they were having this problem. If many people are reporting the same problem simultaneously it could be a bug. Occasionally, you can find a few solutions to try in the comments. 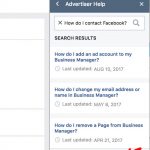 Once you’re signed in to Facebook Business Manager you will see a “Help” button in the top right. Click on that, then look at the fine print at the bottom of the window that pops up. There’s a place to “Report a Problem.” I was told responses can take three to five business days.

Email or Chat With a Person

If your problem is related to ads you’re going to have better luck contacting Facebook because they’re more motivated to help you if you’re trying to give them money. There is a Facebook Business Resources page that has a handy email button at the bottom which leads to another form. The most helpful button on this page is the “Chat” icon. It’s not always there and sometimes you have to refresh or come back later to see if it shows up. The chat hours are 8 a.m. to 6:30 p.m. M-F. But when the chat button is there, you get to talk to a real person! Again, this resource is for ads related questions.

If I’m really desperate I’ll ask if they have any suggestions about my non-ads questions. Once, the representative told me to fill out the forms I mentioned above and when I said I’d done that and received no response, they suggested filling it out multiple times. So, you could give that a try as well.

If those methods don’t work, Facebook is a big company, so use your network to see if you can find someone who knows someone who works there. Most recently I heard that people who work there can submit something like one support ticket a month on behalf of friends and family. If you get the inside track, it’s the most effective way to get something done or at least get an answer about whether anything can be done to resolve your Facebook page issue. If you don’t have any personal network connections with someone who works at Facebook, consider talking to a digital agency, like CenterTable. Some agencies have a Facebook representative assigned to them and the agency can either help you with your problem or hand your question over to a real person at Facebook.

There have been instances where people took their problems public and got their problem resolved. Although this might feel like the most emotionally satisfying way to deal with your Facebook problem, our GroundFloor Media PR crisis experts don’t recommend that as a best practice. In the end, it’s worth remembering that unless you’re buying ads on Facebook, you’re using their service without charge and they don’t have a lot of motivation to spend their time and resources helping you. That doesn’t mean it isn’t frustrating when you have a problem that requires you to contact Facebook.