5 Ways Starting a Business is Like Learning to Surf 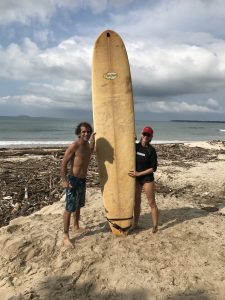 I recently decided to take my first ever solo vacation to Sayulita, Mexico. Earlier this year I made a list of the 52 Things I Wanted to Do in 2017 That Scared Me or I Had Never Done Before. Traveling solo was #38. Learning to surf was #39. In comes Alejandro. “Alex” was introduced to me by a friend as a “forgiving” instructor. He is a father of two teenage boys and, as it turns out, has a knack for teaching a middle-aged, non-athlete how to get up on a board.

Alex and I spent two mornings together. As you might imagine, I spent a lot of time hanging out on my board waiting for the moment Alex would say, “Paddle, paddle, paddle, paddle. Paddle harder. Now, get up!” It was during these moments that it hit me. Learning to surf is a lot like starting a business.

Alex chose La Lancha beach to throw me into the deep end. You have to walk a mile from the road to get to the beach, but it is a spot where novices and experts happily coexist. I was intimidated. I could feel myself getting nervous just watching these men and women who looked like they were born with a surfboard under their feet. But as I watched, I realized even the experts make mistakes. They screw up. They fall. Hard. But they get back out there and wait for the next amazing wave to ride.

Believe it or not, I did get up. Several times, in fact. What I learned is that I had to trust myself enough to decide when to pop up onto the board. Alex, God bless him, would keep shouting at me so I would get up. But the truth is, he couldn’t really see my position from where he was. He wasn’t on my board. I was. At some point, you have to trust that you know the right answer for you and believe in your decision.

Everyone has their own story

The people I met were fascinating. Naked babies ran barefoot on the beach while their mothers picked up trash left from the night before. David, who retired and moved with his wife from North Carolina and now sings in a band in a bar in Punta de Mita, was teaching a young couple how to surf. A British man on a paddleboard stopped to say hello and let us know that the undeveloped land we were staring at was going to be turned into a giant single-family home. The point is this: everyone has a story, an experience, a background. When you are starting a business, it is important to remember that your employees, clients and partners all see things through a different lens than you do. Respect the differences and appreciate their viewpoint. It just may open your eyes to some new possibilities.

Surround yourself with experts

Hire people much smarter than you are. Find your weaknesses and hire for that skill set. You can’t possibly be good at everything, so let that notion go and hire rock star advisors that will make you stronger. Trust takes time, but when you truly trust an advisor, build on that. Get to know them beyond a contractual agreement. Because when things get dicey and you feel like you may drown, those are the people that you can call at 8 a.m. on a Saturday morning with a cry for help. While Alex and I had only known one another for a few days, there were moments that the waves were pretty damn big and I was scared. He taught me how to let my board go and dive under the white water. He taught me how to jump off the board when I got too close to shore to avoid the debris that had washed up from the night before. And he didn’t let me bail until I rode that wave all the way in and was able to give a high five to the guy on the board next to me.

There were moments I wanted to quit. I was tired and was using muscles that I didn’t even know I had. I kept making the same mistakes over and over again. I watched people next to me who made it look so effortless. I was frustrated. I thought I would never get it. Then the moment came when Alex said, “Paddle, paddle, paddle,” and I could feel when it was time to jump up. I jumped. I stayed. I rode the wave in. It wasn’t pretty. But it was all mine.

Starting a business can be scary as hell. But it is worth it.