Finding the right mix of prominent influencers and influencers you can afford is a marketing tightrope. Anyone who has an ongoing influencer relations effort in place is all-too-familiar with that balance, and this past week we’ve come across two great articles that discuss the advent of the “Micro-Influencer.” Twitter is also testing two new analytics features we’re excited to see come to fruition. And: Are you listening? Podcasts are coming back in a big way.

SmartBrief: How to Work with (or Become) a Micro-Influencer
It’s not necessarily a brand new idea, but the concept of “micro-influencers” – those who aren’t full-fledged influencers with hundreds of thousands of followers and require five-digit product mentions – is something that nearly every brand should consider. These individuals with followers ranging from 1,000 to 10,000 tend to be more authentic, more uniquely engaging, and drive interest in a real-world manner.

DigiDay: How Unilever’s Micro-Influencers Fit Into its “Less Is More” Advertising Strategy
Want to see a micro-influencer campaign in action? Here’s a quick view of how Unilever approaches micro-influencers, and how they’re being smarter with their budget along the way.

MarTech: Listen Up: The State of Podcasting in Marketing
Monthly podcast listeners have grown 20+ percent year-over-year. That’s not a huge surprise to our CenterTable Studios team, who has been listening to and recently producing successful podcasts for our clients. Some are comparing the rise of podcast listenership to the Golden Age of Radio – have you considered a podcast in your 2018 marketing portfolio?

TechCrunch: Twitter Testing Feature that Shows You How Many are “Talking About” Tweets
In a move that takes “trending” one step further – and about a hundred steps more relevant for marketers – Twitter is finally working on a “talking about” feature that can quantify how many people are tweeting about a particular topic, brand or product. Fingers crossed that this feature moves from “testing” to “live” sooner rather than later.

MediaPost: Twitter Partners with Innovid on Video Ad Delivery, Measurement
Speaking of new potential with Twitter metrics, this announcement of a third-party partnership with Twitter could mean much more precise video metrics on the platform.

AdAge: Facebook will Show Americans What Russian Posts They Read
In a move to try to shine light on the source of politically-charged posts that were called into question following the 2016 election, Facebook’s online support center will soon be able to show you if you’ve liked or followed a Facebook or Instagram page created by a Russian firm. It’s definitely a move – even if somewhat small and after the fact – in the right direction for transparency.

On the GFM Blog:

What does it Take to be Recognized as a Best Place to Work?
We’re proud to have been featured in the Top 5 of Outside Magazine’s Best Places to work for a fifth straight year. Here are some insights into how we continue to focus on culture and our growing team.

Facebook’s New Campaign Optimization Tool is a Big Win
At a loss for understanding if you’re spending your Facebook advertising budget in the most efficient way possible? You’ll be happy to see this new tool roll out.

Three Things Clients Want from Agency Partners
How can you continually push the envelope for your clients? Here are three things we work on daily for each of our client relationships. 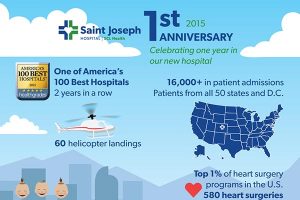 Saint Joseph Hospital | 1st Anniversary Infographic – The 1st anniversary infographic was displayed in the atrium of the hospital and on social media. The graphic had such a positive reception that it stayed up months after the one year celebration, and the client requested an animated version to be posted on social media.