Whether it’s adding functionality or dropping old features, a few of our favorite social media platforms were out in full force this week making tweaks to entice users to share more content. If you’re having trouble keeping up with the latest changes, we’ve got you covered – including a step-by-step guide, an introduction to a new automated tool and a “must follow” list to get you warmed up for the Winter Olympics.

Adweek: Here’s How to Add a GIF to a Story Post
Recently, Instagram added the capability for users to add GIFs to their Stories posts. Been wondering how to get in on that action? Here’s a step-by-step guide complete with illustrations.

Engadget: Snapchat Drops White Frames Around Snaps From Camera Roll
Snapchat has dropped the white frame that used to distinguish photos captured outside the Snapchat camera. The goal of the switch is to encourage people to share even more photo and video memories via the platform. Did it work for you?

The Verge: Snap Will Let Users Share Stories Outside Snapchat With a New Web Player
In conjunction with the broader rollout of its redesigned mobile app, Snapchat is adding a share option to Stories, allowing certain Stories to be viewed on the web. The company is emphasizing that only particular Stories will be accessible, and they will only be available on the web for 30 days.

Gizmodo: Twitter Created a Photo Tool That Knows Where You’ll Look First
Photos on Twitter have long been a pain point. There’s nothing worse than posting an awesome photo only to have an awkward portion of it show up in your tweet. Yesterday, Twitter announced a new tool that will help determine which part of your photo should show up in tweets. We’re really excited to see this automated and new technology roll out!

Forbes: Want People to Share Your Social Content? 12 Ways to Optimize Your Posts
There’s more to building a social media presence than simply posting content. From responding to trends, customizing content for your audience and engaging in conversation – this article captures 12 tips that you can implement today to help your social content shine. 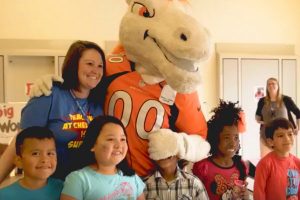 The Day of Service was scheduled at DPS’s Cheltenham Elementary School, in the shadow of the Broncos’ home field at Mile High Stadium. The CenterTable digital and video production team worked with the community relations teams from Noble and the Broncos to develop and execute a comprehensive content plan that included live photography, video and other interactive content to capture the event in a timely and cohesive manner to maximize visibility. Additionally, the #NobleActs hashtag was devised to help group both this event and future Noble volunteer events under one searchable content stream.