What Communicators Can Learn from Teen Activists 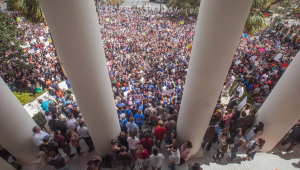 Like other Americans, I watched in horror as yet another school shooting took place, this time in Florida. If there is any good that comes out of this, it has been watching enraged teens share their voices in every possible way. I found this PR Week article: Politicians worst nightmare: Tone, Social Savvy make Parkland students authentic advocates, particularly interesting.

According to the article, what’s working is that students are not being careful and cautious and are not overly messaged. They’re being direct, outspoken and passionate. And they don’t have anything to lose, and everything to gain.

While many are speaking out about what happened, it’s the teenagers who could have the greatest impact on effecting real change. Theirs is the first generation that grew up with the internet and social media. To them, social media is allowing them to speak directly to elected officials, and rally people across the country on platforms to directly share their message.

It’s not just that students captured video and photos, tweeted about what was happening while they were hiding, they’re also using social media to speak directly to the NRA and elected officials.

Students have marched in Florida’s capital and are planning a large demonstration in our nation’s capital. They participated in a CNN Town Hall, where their Florida Senator was called on the carpet. While voter turnout among millennials is the lowest of all age groups, perhaps we’ll see that trend reversed later this year.

In another twist on social media, Twitter security has had to step in to protect teenagers who have been targeted on social media for speaking out: “We are actively working on reports of targeted abuse and harassment of a number of survivors of the tragic mass shooting in Parkland,” Twitter said in a tweet from an official account.

“We are also using our anti-spam and anti-abuse tools to weed out malicious automation around these individuals and the topics they are raising,” Twitter said.

No matter what your views are on the 2nd amendment, it’s hard not to take notice of Generation Z, and how they’re using all the communications tools available to them to speak out, and perhaps make a difference.