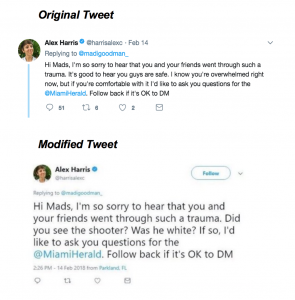 I heard an interesting story on NPR during my commute the other day about Alex Harris, a Miami Herald reporter who was covering the Florida school shootings. She was using Twitter to find witnesses who were willing to talk to her about the shooting. And she started getting some really heated feedback from people about her tweets. It turns out, however, that the tweets people were upset about were screenshots of doctored versions of what she had sent out, not her original tweets. In a somewhat ironic twist, this reporter had become a victim of fake news…

Someone had modified several of her original tweets, adding a sentence asking for photos of dead bodies and a question about the race of the shooter. Understandably, people were upset by this, and while most reporters are sincere, ethical and dedicated to honest journalism, given the unfortunate tendency by some to sensationalize stories at every turn, people immediately accepted these tweets to be the real deal.

And it turns out, there’s really nothing Twitter could (or would) do about it. Currently, while they have policies on impersonation, those policies only apply when someone impersonates an entire account, not an individual tweet. So, there was really no recourse this reporter could take. (On an interesting side note, officials from Twitter will be headed to Capitol Hill today to address this and another related hoax impacting the Miami Herald.)

As a PR professional, I immediately thought of the various ways this underhanded tactic could be employed against almost anyone – be it an executive of a company, a medical professional at a hospital or a government official. And it doesn’t really matter if they’re high-profile or not if the tweets in question are reaching and impacting the opinions of their key stakeholders. We’re constantly working with clients on issues and crisis management – this adds yet another layer we need to be vigilant about monitoring.

But, how to distinguish real tweets from fake ones and prevent a client’s reputation from being smeared? It can be really tough – especially when the fake tweets (or any other type of social media post) contain all the typical evidence of a verified tweet, i.e., a timestamp and a blue verified checkmark. Based on her experience, Harris wisely recommends that people be wary of screenshots and look for links to actual live tweets instead. She also advises people to look at the source of the tweet and to gauge that person’s intent.

To that I would add withholding immediate judgment and looking at the source in question’s typical patterns of behavior on social media:

It’s a crazy world out there in terms of fake news right now, and this case highlights yet again the need for everyone to read and interpret articles, social media posts, etc., with a thoughtful and discerning eye.