ICYMI: In Case You Missed It

Home > Blog > Social Media > ICYMI: In Case You Missed It 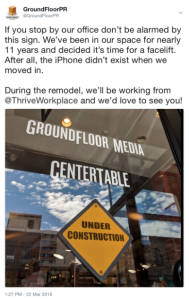 The social world continues to run like a hamster in a ball, but we’re taking a moment to step out of the rat (hamster?) race to reflect on some of the erudite content GroundFloor Media and CenterTable have put out into the world.

If you missed our Tweet, don’t be alarmed when you stop by 1923 Market St. and don’t find us. We’re a few blocks down the street as our offices are undergoing a remodel. We’re hoping to be back at the end of the summer.

How to Speak Designer: The Basics

If you’ve ever found your brow furrowed in confusion when you’re speaking with a graphic designer, it might be worth brushing up on the basics of designer-ese. Our creative team shares a few terms and techniques for successfully communicating your creative vision so what comes out on paper gets closer to your vision.

The Answer to Your Next Brainstorm is a Better Question

Sitting around a table during a brainstorm looking at each other, waiting for inspiration to strike might feel a little awkward. Try turning your next brainstorm session on its head by asking people to ask questions not give you answers. Asking questions can help challenge deeply held assumptions and get to really creative answers. If you’re interested in the theory, jump into the blog post for specifics on exactly how to make this happen.

SXSW 2018: Why Carly Rae Jepsen Should Be Every Communicator’s Inspiration

Want to know how to write a compelling narrative every time? A pair of scientists spoke at South by Southwest (SXSW) about their quest to help other scientists become better communicators by understanding the underlying structure of strong narratives. If your eyes just glazed over and you’re asking “but what about Carly Rae?” Fear not. Carly and the writers of South Park inspired much of the scientists’ work so you’ll learn something and get an ear worm out of this post.

We went to HBO’s Westworld activation, the buzziest event of SXSW. SXSW is inherently about digital communications but the prevalence of these digital tools and our reliance on them has caused some brands to lose touch with the importance of creating experiences that their fans can share both online and off. HBO bucked that trend with an activation that brought fans right into their show. You can do it too, even without an HBO-sized budget.

Business Success Boils Down to Purpose

We attended Social Media Marketing World in San Diego – a two-and-a-half day session-packed conference focused on the most relevant trends and information in the world of social media. It’s enough to overwhelm anyone. We condensed the information to the best bits that are safe to try at home, or in the office.

How To Make Your Data Dashboard Actionable, Not Recyclable

What do your executives do with the dashboard you hand them every month? Nod, ask a question, then file it away… in the circular file known as the trash can perhaps? You worked hard to put that dashboard together so there should be a “Now What?” that makes whoever gets it excited to grip it in their fist and take action! It is tough but not impossible.

What Communicators Can Learn from Teen Activists

No matter your views are on the 2nd amendment, it’s hard not to take notice of Generation Z, and how they’re using all the communications tools available to them to speak out, and perhaps make a difference. What’s working? The students aren’t being careful and cautious or overly messaged. They’re being direct, outspoken and passionate and they don’t have anything to lose.