Is this thing on? While Google+ isn’t going to be on much longer, Pinterest, LinkedIn and Facebook are all testing features that digital marketers might want to anticipate. All the new features seem to be driving toward increasing the engagement you get from followers. Only real-world testing (or maybe a Facebook poll) will tell whether your particular audience engages more when you use these new features.

Despite the giant resources the Google+ team had at their disposal, they just couldn’t make the social platform happen. Now Google+ is going the way of Orkut, Google Wave and Google Buzz (those all used to be things). As of August 2019, marketers can stop feeling obligated to post to the Google+ ghost town, even for the sake of SEO.

E-commerce (and maybe nonprofit) brands rejoice! There’s a new icon coming to Pinterest and it’s a shopping tag. Pinterest will make millions of Pins shoppable by displaying the pricing and stock information. Could nonprofits get creative with a Shop the Look pin and use it for multiple donation calls to action? Maybe. Giving looks good on everyone right?

The average Facebook video view time is roughly 10 seconds which can make people who put hours into creating videos sigh a sad sigh. This is why we’re excited to see Facebook test the idea of including polls within video ads. The more possible chances for engagement, the more chances to collect data and engage your audience. Hopefully, it moves the needle well above that ten-second mark.

Every social platform has a special black box called an algorithm that determines who gets shown what and when. When we hear there are ways to circumvent the black box, it’s like we have a video game cheat code! LinkedIn appears to be testing something called a Series which gives people the chance to follow a series of posts, ensuring followers will at least get notified about each one. This is still in testing and not yet open for everyone to use but your expertise in pickles is about to find a perfect LinkedIn tactic. Pickled tomatoes, pickled beets, pickled peaches, what a series it will be! 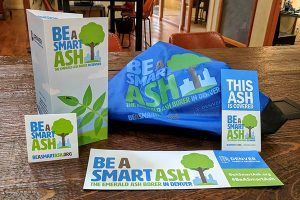 Denver Parks & Recreation | Be A Smart Ash Logo Design & Branding
Denver Parks and Recreation was looking for a brand identity that focuses on the trees themselves, but also easily relays the key messages of the campaign for all Denver residents. By spreading the eye-catching branding across social media, printed materials and giveaways, CenterTable helped the city maximize its efforts to bring the EAB issue to the attention of Denver residents.