Now in its seventh official year, Giving Tuesday is becoming an increasingly crowded space for nonprofits to stand out and fundraise. That said, we watched this Tuesday as several nonprofits didindeed stand out, smashing Giving Tuesday Fundraising Records from 2017. With holiday giving continuing to be a major focus for nonprofits into December, we examine some of the strategies nonprofits successfully employed this week.

In time for Giving Tuesday, 25 of the biggest gamers who broadcast on Facebook Gaming, including DiMez, TheMissesMae and X-Bit Gaming, were able to set up fundraising programs to raise money for nonprofits like Autism Speaks, Call of Duty Endowment and St. Jude Children’s Research Hospital. Funds were raised through the platform’s streamer dashboard, with gamers able to select a nonprofit, set donation goals and track funds on the stream with a progress bar. Facebook has indicated it will start rolling out the tool to more gamers soon.

Speaking of St. Jude, the nonprofit research hospital partnered with Adobe on a unique fundraising project this Giving Tuesday. Together, the two companies highlighted the new Together by St. Judeplatform, a comprehensive online resource for those impacted by pediatric cancer developed in partnership with Adobe. Illustrating this corporate-nonprofit partnership provided corporate donors a sample of the value-based partnerships St. Jude can create, while also providing smaller donors with a clear look at what their funds would be supporting.

When considering the sort of creative to use for your fundraising campaigns, digital media metrics continue to suggest video is a highly engaging medium among key demographics. As eMarketer points out in this new research piece, 64.8 million millennials will watch digital video at least once a month, which is 90 percent of the demographic. And that percentage has increased significantly over the last three years.

With video continuing to emerge as an engaging marketing medium, advertisers are continuing to look for new platforms to utilize this content. And they may have found one in TikTok. The short-form video app combined with Musical.ly in August and has already produced several viral hits. And while they’re yet to offer advertising options, many companies are already working with influencers to get their messages onto this emerging platform.

How can nonprofits do more to engage users who donate on days like Giving Tuesday or Colorado Gives Day, and turn them into lifelong advocates? Facebook Groups may be an answer. Facebook’s 2018 algorithm change actively distanced brands from their followers by limiting exposure to organic content posted by businesses. At first glance, it seemed the only solution for brands was to invest in more ad campaigns. But some businesses have now found an alternative: connecting with their audience by building vibrant Facebook Group communities, which still enjoy strong organic reach.

3 Videos You Might Have Missed in 2018– Need inspiration for the your next creative project? Armand Piecuch examines three creative and effective video projects that flew under the radar in 2018.

How to Tackle Big Goals: Pro-Tips from a Black Belt– You wouldn’t want to meet Rachael Roark alone in a back alley, but you’ll absolutely want to read about the small lifestyle tweaks she made to help tackle her big goal of becoming a Taekwondo black belt. 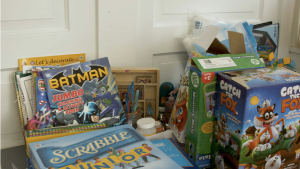 Every year, the Get Grounded Foundation awards local community programs that provide services to at-risk youth in Denver.
Denver CASA (Court Appointed Special Advocates) is an organization committed to training community volunteers from diverse cultural and ethnic backgrounds to provide children in special circumstances with a safe and nurturing environment.