The campaign launch included statewide media coverage and an online audience of more than 15,000

The Colorado Meth Project partnered with GFM to launch a statewide drug prevention organization to educate teens on the dangers of prescription drug use and provide the tools to lead a drug-free life. The campaign required an integrated effort to name, brand and introduce the organization to Colorado. 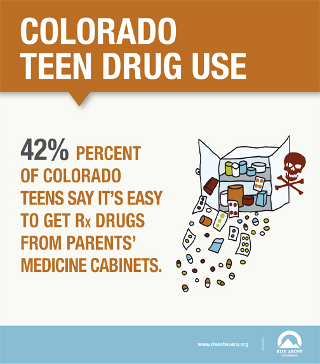 The “Rise Above Colorado” brand was developed along with a comprehensive messaging platform to help effectively communicate the challenges teens are faced with, as well as the goals of the newly named organization. Special events were held in Denver, Grand Junction and Colorado Springs, along with a targeted statewide media relations campaign to raise awareness of the issues, and what Rise Above Colorado would be doing to promote change. The website, SEO campaign, social media strategy and creative content were launched in lockstep, including a paid creative digital campaign to boost followers and engagement.

In just a few weeks surrounding the launch of Rise Above Colorado, media coverage was secured in Denver, Colorado Springs and Grand Junction on all various broadcast stations, as well as in regional print publications, newspapers and Hispanic media outlets. Coverage appeared in 5280.com, The Denver Post, Colorado Parent, The Daily Sentinel, Colorado Gazette, KKCO-TV Grand Junction, KUSA-TV Denver and Telemundo Denver. Rise Above Colorado also benefitted from the integration of a new brand identity, social media platform development and engagement, content development and media relations. The growth on Rise Above Colorado’s social media platforms rose to more than 15,000 followers on Facebook and Twitter within six months of creation.