Incorporate a CSR component to the 111th store opening, timed with Veterans Day on 11.11.11 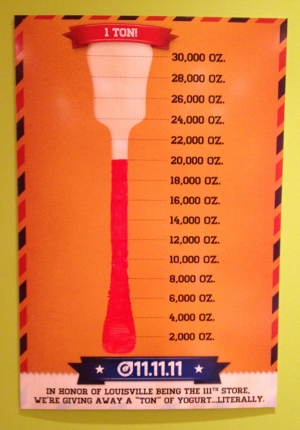 In less than two years, Oklahoma City-based Orange Leaf Frozen Yogurt grew to include more than 100 stores nationwide. To celebrate the chain, known as America’s Frozen Yogurt™, engaged GFM to commemorate the occasion by helping to publicize the milestone to media and consumers.

The 111th store opened in Louisville, Ky., a new market for Orange Leaf Frozen Yogurt. To make a splash, GFM devised a plan to give away a ton (2,000 pounds) of free frozen yogurt. GFM worked with the local franchise team to coordinate logistics and develop messaging, as well as to conduct local media outreach and product sample drops.

Concurrent with the 111th grand opening, Orange Leaf Frozen Yogurt announced a nationwide partnership with A Million Thanks for a letter-writing campaign, inviting customers to draft a letter thanking American Troops for their service. GFM combined this announcement with news of the 111th store milestone in a pitch to local media as well as national trade and business media. GFM also provided national social media content and strategy to maximize consumer engagement.

In Louisville, GFM made product drops to almost every media outlet and secured live, in-store spots on the local FOX and CBS affiliates. The store enjoyed a steady flow of traffic, distributing the free ton of frozen yogurt in less than 24 hours.

Most importantly, more than 4,000 letters from Orange Leaf Frozen Yogurt customers were delivered to American troops.