Thirty-seven blocks of streets were closed to cars, enabling thousands of local residents to bike, jog, stroll or dance their way through the streets. 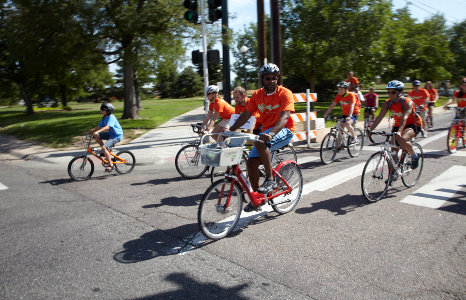 Both organizations set out to create an event that would demonstrate the willingness of Denver’s leadership and citizens to embrace an active lifestyle, make changes to the environment in support of physical activity and, most importantly, view and use the city’s streets, sidewalks and neighborhoods as venues for exercise, recreation and community. Furthermore, it was important to LiveWell Colorado to educate people that walkable and bikeable communities have benefits that extend far beyond keeping residents healthy. They connect families with schools, parks, shops and each other and result in cleaner, safer neighborhoods. To position Viva Streets as being bigger than just a fun street fair-type event, to a day that encompassed a wider message about built environments and healthy living in Denver, LiveWell Colorado tasked GroundFloor Media (GFM) with creating ample pre-event, day-of and post-event buzz across traditional and social media channels.

Thirty-seven blocks of streets were closed to cars, enabling thousands of local residents to bike, jog, stroll or dance their way through the streets. The ciclovia, supported by Kaiser Permanente Colorado, showcased walkable and bikeable neighborhoods as core to a city’s health and an important tool for addressing rising obesity rates. Prominent politicians were also invited to participate in order to demonstrate the city’s support for LiveWell Colorado and BikeDenver’s efforts to bring a ‘ciclovia’ to Denver. Activities along the two-mile route included a Denver Nuggets and Colorado Avalanche fun zone, yoga and zumba in the park, face painting, a children’s bike rodeo focused on bike safety skills, healthy food demonstrations and much more.

GFM utilized the myriad of day-of activities, along with the confirmed political support of key councilmembers, to conduct media and blogger outreach that highlighted why Viva Streets was critical for exposing Denver families to the benefits of exploring their city by bike and on foot.

LiveWell Colorado hopes to bring Viva Streets to more metro communities in 2012 and beyond in an effort to challenge Colorado residents and leaders to experience its streets as more than just a pathway for cars, but also as a vehicle for long-term health.