Market Force and GFM saw an opportunity to earn media coverage by leveraging the market research the company could produce on an ongoing basis using its network of more than 600,000 independent contractors as a consumer survey panel.

GFM's research-driven PR program for Market Force has been a raging success during the past two years and it achieved a holy grail: directly linking PR to several sales leads. 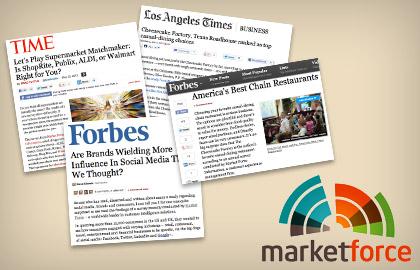 Market Force Information provides customer intelligence solutions – from mystery shopping to customer satisfaction surveys to social media monitoring and analytics, all hosted on a cloud-based decision support platform – to more than 300 of the world’s largest business-to-consumer brands. Market Force had grown quickly through acquisition, and wanted to create a new market space called Customer Intelligence to accommodate the breadth of its products and position the company as a leader in that space. As daunting as that goal was, the company needed to do it with a small marketing budget. Market Force enlisted the GroundFloor Media (GFM) team to help it establish the Customer Intelligence market and boost credibility among clients and analysts through media coverage.

Market Force and GFM saw an opportunity to earn media coverage by leveraging the market research the company could produce on an ongoing basis using its network of more than 600,000 independent contractors as a consumer survey panel. Rankings of brand favorites are always interesting to the media, so beginning in late 2009, Market Force began conducting regular surveys, with each focused on ranking favorite consumer brands specific to one of its target industries. Market Force’s research has revealed consumers’ favorite quick-serve restaurants, grocery stores, retail stores and gas stations, to name a few. Each survey could quickly get thousands of consumers responding, which provided rich data about what makes each brand a favorite, along with other pertinent consumer trends and attitudes.

GFM devised a plan to package the key findings into news announcements, as well as to incorporate them into proactive media pitches over the course of the year. To start, the team created extensive media lists for each vertical industry and ironed out an easily replicated process with the internal Market Force team.

Based on the best practice that was set forth, GFM now analyzes every set of survey results, develops the search-optimized news announcements, works with Market Force to produce high-resolution supporting graphs, and begins pitching the news a week ahead of the announcement date. Outreach is geared toward relevant trade press, as well as national newspapers and mass media outlets. What’s more, GFM uses the research data as the cornerstone for Market Force’s speaking program and as fodder for contributed articles.

GFM’s research-driven PR program for Market Force has been a raging success during the past two years and it achieved a holy grail: directly linking PR to several sales leads. As a result of GFM’s media outreach, requests for more information and new business meetings have come directly through GFM from national marquee brands such as Aveda, ALDI, Red Robin, The Cheesecake Factory and Dick’s Sporting Goods.
Market Force’s coverage goals have also been exceeded. GFM’s media outreach around each industry survey typically results in several interviews and an average of 25 pieces of coverage, with some of the more popular research resulting in nearly 100 stories. The team regularly secures feature articles in trade publications such as MediaPost, Nation’s Restaurant News, Progressive Grocer and STORES Magazine, and, in mass media outlets such as Forbes, The Huffington Post, Los Angeles Times and TIME. Additionally, research snippets are frequently included in local/regional radio, print and TV stories. GFM has also secured recurring editorial features based on the research, as well as a permanent FastCasual.com blog for Market Force’s chief marketing officer.

Although Market Force isn’t an industry analyst firm, it’s quickly taken on that cache as a thought-leader across all of the eight industries it targets. Its research is regularly cited in articles and blogs, and is included in press releases issued by major brands such as ALDI, Giant Foods, and Kohl’s.